How Bitcoin Shapes the Future of Africa 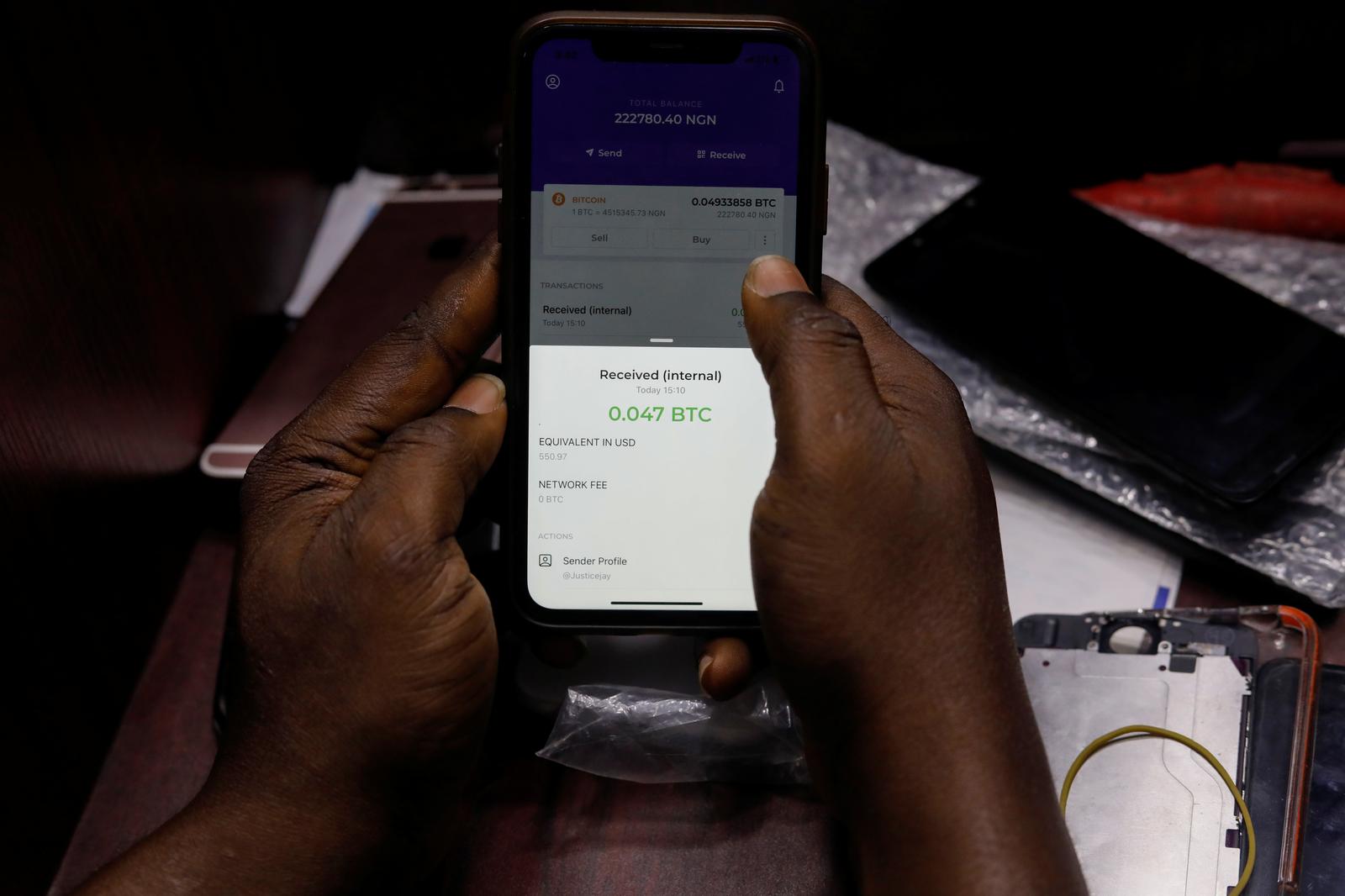 09 Sep How Bitcoin Shapes the Future of Africa

Posted at 11:57h in bitcoin by Crypto Shaman 0 Comments
0 Likes

Four months ago, Abolaji Odunjo made a fundamental change to his business selling mobile phones in a bustling street market in Lagos: He started paying his suppliers in bitcoin.

Odunjo sources handsets and accessories from China and the UAE. His Chinese suppliers asked to be paid in the cryptocurrency, he said, for speed and convenience.

The shift has boosted his profits, as he no longer has to buy dollars using the Nigerian naira or shell out fees to money-transfer firms. It is also one example of how, in Africa, bitcoin — the original and biggest cryptocurrency — is finding the practical use that it has largely failed to elsewhere.

“Bitcoin helped to protect my business against the currency devaluation, and enabled me to grow at the same time,” Odunjo said. “You don’t have to pay charges, you don’t have to buy dollars.”

Odunjo is one of many people at the heart of a quiet bitcoin boom in Africa, driven by payments from small businesses as well as remittances sent home from migrant workers, according to data shared exclusively with Reuters and interviews with around 20 bitcoin users and five cryptocurrency exchanges.

Monthly cryptocurrency transfers to and from Africa of under $10,000 — typically made by individuals and small businesses — jumped more than 55 percent in a year to reach $316 million in June, the data from US blockchain research firm Chainalysis shows.

The number of monthly transfers also rose by almost half, surpassing 600,700, according to Chainalysis, which says the research is the most comprehensive effort yet to map out global crypto use. Much of the activity took place in Nigeria, the continent’s biggest economy, along with South Africa and Kenya.

This represents a reversal for bitcoin which, despite its birth as a payments tool over a decade ago, has mainly been used for speculation by financial traders rather than for commerce. 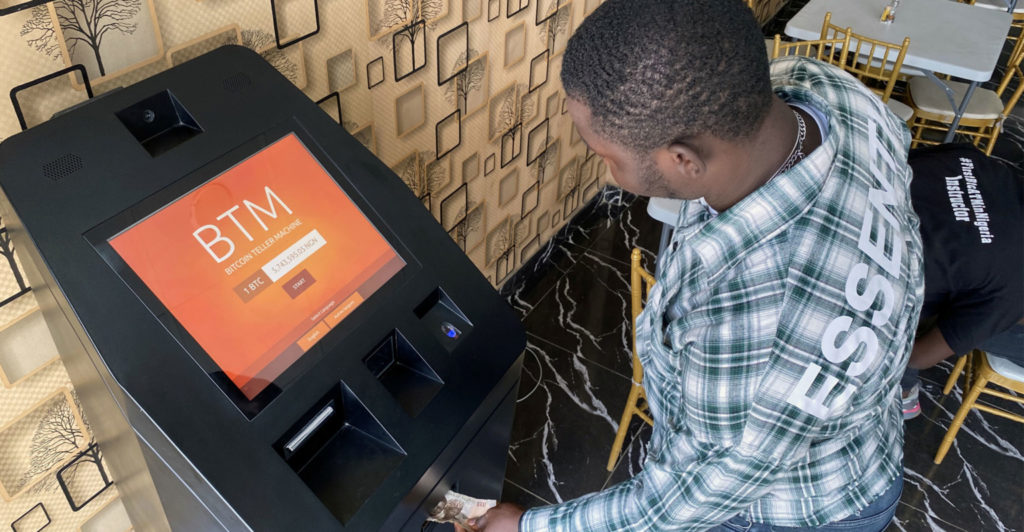 A bitcoin user buys bitcoins with naira at a bitcoin ATM in Lagos, Nigeria. Seun Sanni/Reuters

Why a boom in Africa? Young, tech-savvy populations that have adapted quickly to bitcoin; weaker local currencies that make it harder to get dollars, the de facto currency of global trade; and complex bureaucracy that complicates money transfers.

The bitcoin users interviewed by Reuters, based in five countries from Nigeria to Botswana, said the cryptocurrency was helping people make their businesses nimbler and more profitable, and helping those working in places like Europe and North America hang on to more of the earnings they send home.

Bitcoin and other cryptocurrencies are unregulated in many countries meaning there is no safety net. For many, converting local currencies to and from bitcoin relies on informal brokers. Prices are volatile, and buying and selling is a complex process. In 2018, the Nigerian central bank warned cryptocurrencies were not legal tender.

A steady stream of customers comes and goes from Odunjo’s shop in a market known as Computer Village. Odunjo makes two or three transfers a month of around 0.5-0.7 bitcoin ($5,900-$8,300) each, to suppliers in Shanghai and Zhangzhou. East Asia, Chainalysis found, is one of the top partners for bitcoin trading with Africa.

Odunjo’s trades offer a microcosm of the wider trends at play in Nigeria and across the continent.

In Nigeria, small cryptocurrency transfers totalled nearly $56 million in June, nearly 50 percent more than a year before. The number of transactions jumped over 55 percent to 120,000.

Gauging how cryptocurrencies are used in particular locations is tough, though. Digital coins offer a high degree of anonymity, and though the value of transactions can be tracked on the blockchain, the identity or location of a user cannot.

Chainalysis, which tracks crypto flows for financial firms and US law enforcement, gathered the data studying web traffic and trading patterns, separating transfers of under $10,000 from larger sums common among professional traders. With Nigeria’s oil-dependent economy rocked by low crude prices, the central bank has twice devalued the naira this year. 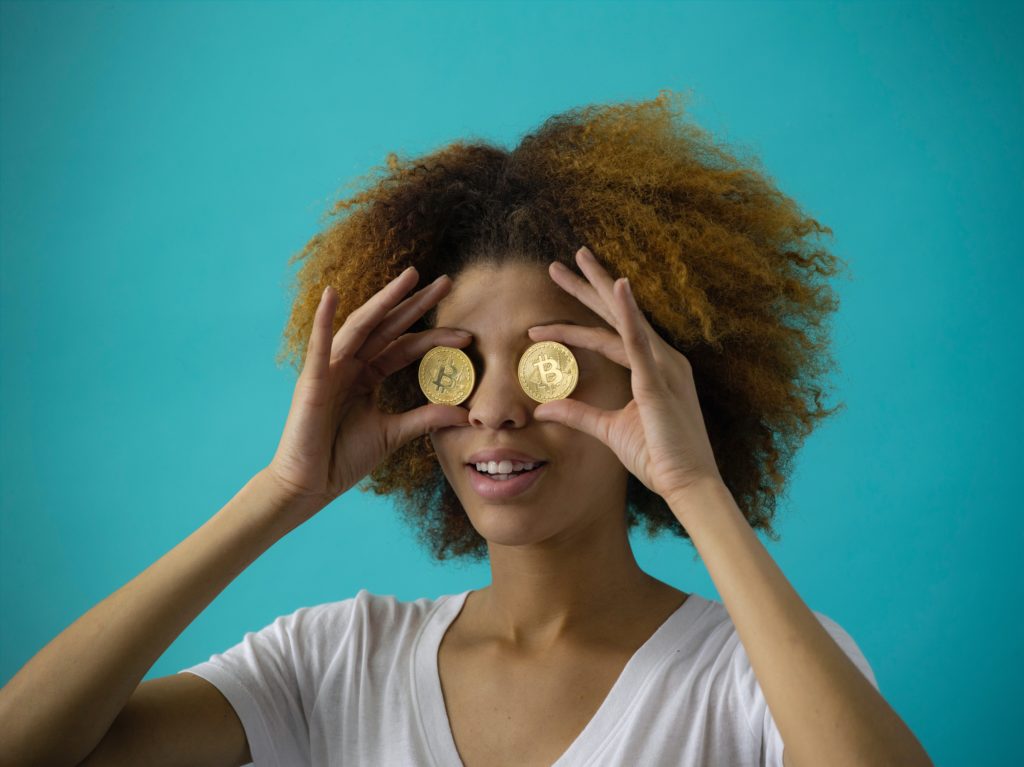 The naira’s fall has pushed many Nigerians toward bitcoin as they seek methods of buying goods from overseas without having to buy dollars.

Sylvester Kalu, who runs a clothing operating in Uyo, eastern Nigeria, uses bitcoin to buy supplies from Istanbul and Shenzhen. “Everything is oil. When the price of oil dropped, forex became scarce,” he said.

The 30-year-old said his transactions totalled around 2 bitcoin ($20,000) a time, adding: “I don’t need anyone in the banks, I don’t need a person to use the back door to get dollars.”

Timi Ajiboye, who runs Lagos exchange BuyCoins, said its monthly cryptocurrency volumes jumped over three-fold to $21 million in June after the naira was devalued in March.

Exchanges across Africa spoke of a similar boom. Yellow Card, which operates in five countries, said its monthly crypto volumes had jumped five-fold in 2020 to $25 million in August. A big driver was workers using bitcoin for remittances, it added.

The combined monthly bitcoin trading volumes of all market participants in South Africa and Nigeria jumped by half this year to more than $536 million in August.

For some people working abroad, sending money home via bitcoin can be quicker and cheaper.

A Nigerian worker in London sending £100 ($132) in cash to Lagos via a big traditional money-transfer firm, for example, would pay fees of around 5 percent.

Bitcoin fees vary depending on the exchange or broker, but would typically total about 2-2.5 percent for sending the same amount.

However both exchanges and over-the-counter (OTC) brokers carry risks, from hacks to scams. 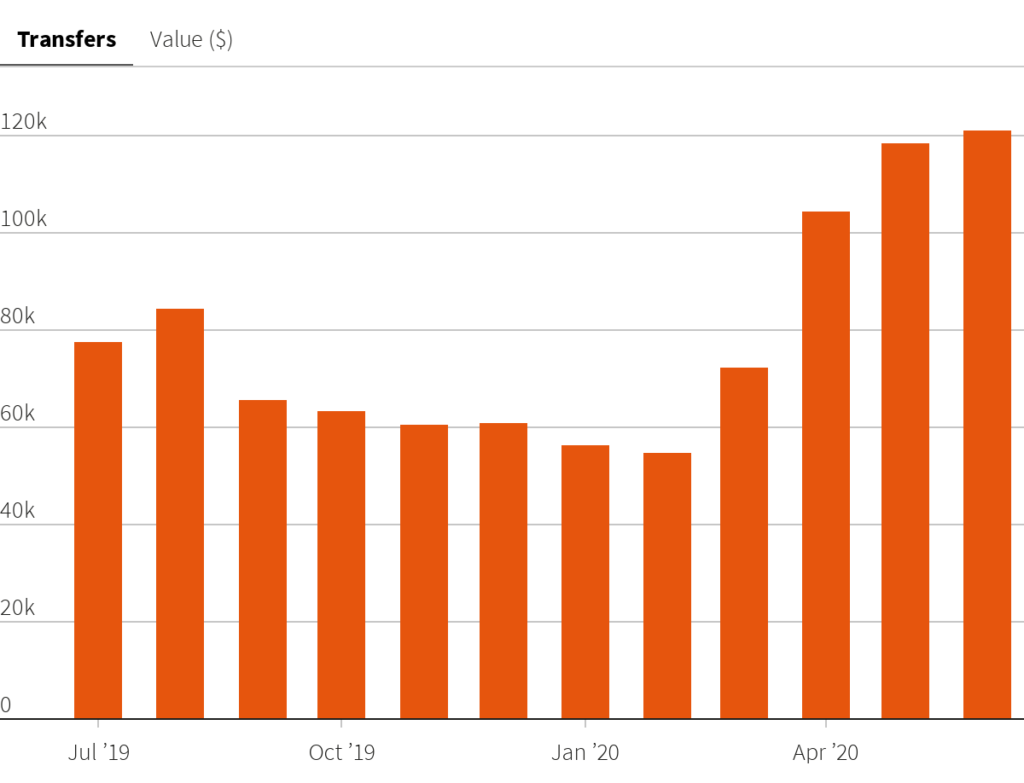 Cryptocurrency transfers under $10,000 to and from Nigeria outside Africa. Source: Chainalysis

And bitcoin, while handy for transfers, isn’t much use on the ground — shops and landlords rarely accept it, for instance. This means friends or family sent funds by workers must convert it back to traditional currency, often via a broker at their end, introducing additional risk.

But for a growing number of people, the potential rewards outweigh the pitfalls.

“People are very adoptive of any technology that will make their life easier,” said Frankline Kihiu, a crypto broker in Kenya’s capital, Nairobi.

“In most African countries, there are lots of government restrictions that bitcoin takes away.” 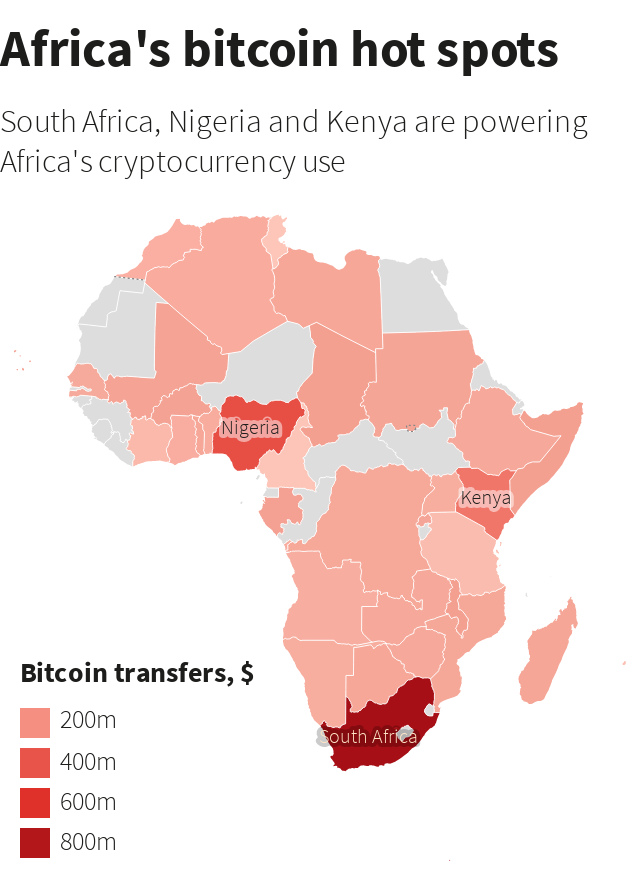 Note: Bitcoin transfers under $10,000 to and from Africa, July 19 – June 20. Data not available for countries shaded grey. Source: Chainalysis

Reported by Alexis Akwagyiram in Lagos and Tom Wilson in London, with additional reporting by Nneka Chile, (c) 2020 Reuters